Gudi Padwa marks the beginning of Marathi New Year and is usually celebrated on the first day of the Indian month of Chaita,  based on the lunar calendar.  Like most Indian festivals, which have a history related to them, Gudi Padwa too holds an intriguing history.

Called ‘Ugadi’ in the state of Karnataka, this festival is filled with a unique charm. The Rangolis, puran-polis, kheer, gudi (flag), and ‘navaris’ (nine yard saris) are all a delight on this day.

This is the time, when mangoes and fruits are reaped. Gudi Padwa is the time when you find the delicious ripe mangoes in the market.

According to legends as believed by the Hindus, this is the day Lord Brahma created the world. One legend also says that on this day Lord Vishnu took the Matsyar incarnation or the fish form to save the earth from destruction.

Marathis celebrate this festival in honor of the great Maratha king, Shivaji Maharaja – the veteran Maratha leader to celebrate the victory march of Marathas.

It marks the famous harvesting festival in India known by various names all over the country.

In ancient times, people believed that on this day the Sun assumes a position above the point of intersection of the equator and the meridians, marking the commencement of the Spring season.

You will find a bamboo stick with gudhi (copper or silver pot), mango leaves, red flower, and bright green or yellow cloth hoisted outside the Maharashtrian household.

The Gudhi/gudi is placed in an inverted position.  Some people also decorate the gudi with neem leaves and sugar crystals. 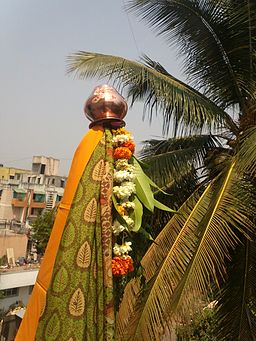 The sight of this bright Gudi is a treat to the eyes.  Some people believe that Gudi was first raised to symbolize Lord Ram’s victory and happiness on returning to Ayoghya after slaying Ravana.  Also, Ram returned home after completing 14 years of exile, so people celebrated his victory and returns by raising a Gudi.  This tradition is still practiced in India, although the reason differs.

Gudi is believed to ward off all the evil and invite prosperity and good luck into the house.  The Gudi is usually positioned on the right side of the main entrance of the house. The right side symbolizes the active state of the soul.

Deep cleaning takes place in every household.  The entrance of the houses is adorned with beautiful and colorful Rangolis.  People dress up and meet friends and relatives.

Traditionally, families are supposed to begin the festivities by eating the bittersweet leaves of the neem tree.  At times a paste of neem is prepared and mixed with jaggery and tamarind.  All family members consume this paste which purifies the blood and strengthens the immune system.

Rejoice, because Gudi Padwa brings with itself the season of mangoes.