Mumbai, the business capital of India, is known for its tourism. There are many historical monuments and sculptures in Mumbai which people visit to see while on vacation.

One such place is Elephanta Caves, located on an island just off the coast of Mumbai city. These caves were built between the 5th-7th century AD by Hindu kings.

The structure of these caves shows the perfect blending of Dravidian and Nagara styles of Hindu architecture.

This blend makes it one among few temples with two different styles of temple building existing side by side. It was originally called Gharapuri, but later it became popularly known as ‘Elephanta.’

The world heritage site is dedicated to Lord Shiva and has some fascinating rock-cut architecture and statues dating centuries back.

The Elephanta Caves are situated in the middle of Mumbai Harbour, off the coast of Mumbai. The island was known by three different names during ancient times.

It was called Gharapuri or Gharapur Island, which means City of Caves, Sonapuri, and Elpata. The ancient Indians believed Shiva established his lingam at this site and created a new era – the ‘Shanivar era.’

Two teams worked on Elephanta caves in its long history- one during the 5th century and another before the 15th century. Most of it is attributed to the former team as they have found more proof for their work done than others.

During the Mauryan dynasty, in the year 5th century, the two brothers Manku and Charanku, worked on this site. They were responsible for creating rock-cut temples here, which are known as Cave 1 to 6.

According to historians, it is believed that they belonged to a non-Aryan tribe called ‘Mallas’ who ruled over large parts of ancient India between the 6th c BC to 12th c AD.

The second team was probably from outside Maharashtra. Historians have found evidence suggesting that people of Konkan used to call themselves ‘Konkana.’ This word resembles the Kannada language where ‘Ko’ means same while ‘na’ means land.

Hence, Ko-na-nak-desa gives Konkan. Historians believe that the second team probably belongs to the Kannada-speaking Kanarese people, who were responsible for reviving the ancient glory of Elephanta by making new shrines and sculptures in the 10th century. 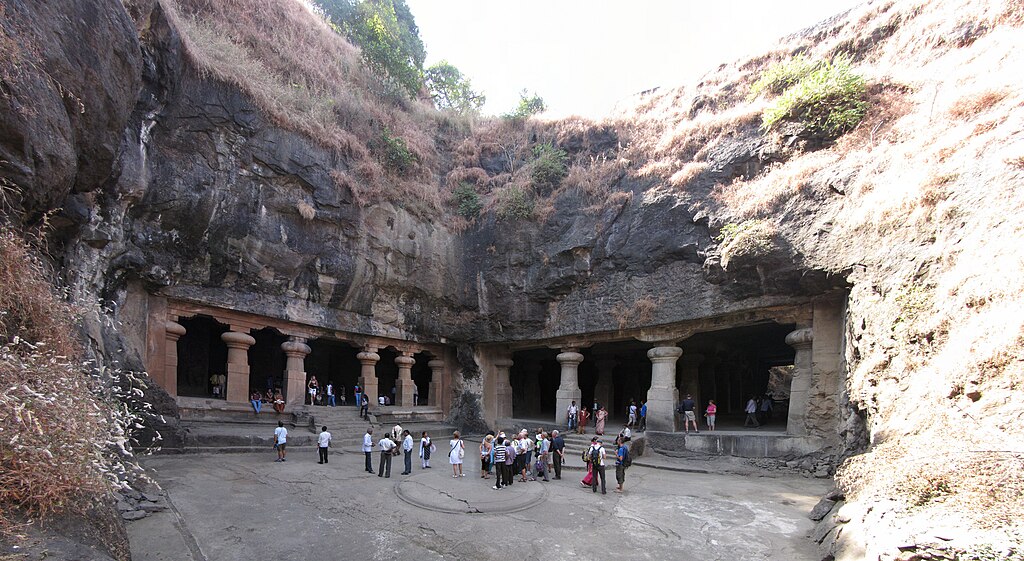 Architecture: The Elephanta Caves are a group of rock-cut temples that were excavated in order to reveal five different temples dedicated to Lord Shiva that can be found at this site along with other deities like Ganesha Vishnu, Surya, Ravana, and Durga.

They also have images depicting scenes from Indian mythology engraved on these walls, closely resembling those seen in cave paintings from Ajanta and Ellora.

Besides these, there are several other sculptures depicting gods, goddesses, and demons. Of the three caves that have been carved out from a massive basalt rock, there is also a shrine dedicated to Lord Ganesha.

What visitors can get to see in the Elephanta caves

Visitors who visit this place will be able to see as many as seven different temples here that were built between 500 and 1050 A.D.

People can also go boat riding on the backwaters of Mumbai, located near the island where these caves are located. There is also a museum in this place that houses the famous Elephanta sculptures and artifacts.

Statues that depict three different deities, Ganesha, Vishnu, and Shiva, have also been excavated in this place, along with a shrine that houses a seven-faced Sadashiva deity in a central shrine located inside the main temple.

There is also a Nandi bull sculpture that can be seen in one of these caves. People who visit this place should not miss seeing all these beautiful pieces of art.

Elephanta Caves, a UNESCO world heritage site and a major tourist spot in Mumbai, houses rock-cut Hindu sculptures. It also houses a group of inscriptions written in Brahmi script from the first century BC.

The carvings depict Lord Shiva as Mahayogi, dancing Lord Nataraja and as Gangadhara. These sculptures are life-sized, realistic figures carved out of one piece of rock with detailed finishing added later on, as can be evidenced from the shikaras (decorative top), which was only added later on.

The Statues found in the cave include:

The sculpture is from the Gupta period from the 5th century AD. This statue shows a goddess who is seated on an elephant. She has four arms, and two of her hands are broken.

There are sun and moon emblems at her head which stands for time and death, respectively. It has been believed that she holds a plough, a conch shell, a tree shoot, a turning wheel, and a lotus flower in each of her hands to signify fertility, prosperity, and righteousness, respectively.

The goddess also has several animals beside her, like peacocks, etc.

This statue represents Lord Shiva as the cosmic dancer of creation and destruction.

It was built during the 10th century AD by a Pallava king and is a masterpiece of Indian art. Lord Shiva’s right leg is raised and bent at the knee, and the left hangs low, with his head turned back and eyes closed in meditation.

He holds a small drum shaped like an hourglass which represents time. A tiny statue of a bull stands behind him as he dances on the demon of ignorance called Apasmara Purusha, who personifies ignorance, laziness, or forgetfulness that makes one ignore spiritual practices.

This pillar capital has been made by Chalukya king Mangalesha from AD 543 to 568 AD. It bears a resemblance to a horse’s head with a sharp beak-shaped structure below it. This structure has been used as a support to tie horses.

There are no ornate carvings and statues that we see in Ajanta or Ellora, but the cave architecture of Elephanta is even more amazing.

It looks like a fort, with massive walls surrounding it, and the only entrance/ exit to the caves is through narrow steps cut out of rock which can be approached by crossing a bridge over water.

The huge statue of Ganesha has beautifully carved pillars and also two smaller temples inside it.

Sculptures include those of Lord Vishnu, Durga slaying Mahishasura, Lingodbhava (a representation of Siva emerging from an opening lingam), and so on.

Siva Nataraja sculpture is the best example of Chola Art in North India. It represents Lord Shiva as the cosmic dancer who performs his divine dance to destroy ignorance.

The other sculptures for which Elephanta Caves are famous include Trimurti (a three-headed bust of Brahma, Vishnu, and Siva), Ardhanarishvara (half male and half female – Man-Lion), Harihara (half male half female representing Siva with wife Parvati), Mahesamlokha (Lord Shiva depicted in a fury with numerous arms) Gajalakshmi (a bust where Goddess Lakshmi appears on a lotus leaf emerging from water), etc.

Goddess Mother Earth sculpture is from the Gupta period from the 5th century AD. It shows a goddess seated on an elephant and has four arms, and two of her hands are broken.

She holds a plough, a conch shell, a tree shoot, a turning wheel, and a lotus flower in each of her hands to signify fertility, prosperity, and righteousness, respectively.

Horse-Shaped Capital from Aihole was made by Chalukya king Mangalesha from AD 543 to 568 AD. It represents a supporting structure for tying horses.

Elephanta Cave architecture consists of massive walls surrounding it with narrow steps as entrance/ exit across water surrounded by caves cut out of rock look like forts.

Elephanta is a world heritage site that comes under the protection of the Archeological Survey of India.

How to reach Elephanta Caves in Mumbai

The nearest airport is Chhatrapati Shivaji International Airport at Sahar, which is about 16 km away. Besides this, another closest option would be Juhu Aerodrome which lies only 7km away from the site.

Buses run by BEST ply from CST station and swargate bus stand, plying towards Alibag. The caves are located a little away from the main road in a place called Gharapuri or Elephanta Island. Tourists can hire taxis to go to this island from CST station.

There are boat services from the famous Gateway of India too.

The best time to visit the caves would be from October to June when it remains relatively cool and dry. The humidity levels during this time remain conducive enough for exploring the place.

Tourists should avoid visiting between July – September because heavy rainfall makes most parts of the island inaccessible.

Considering that the island is surrounded by sea, tourists may face problems in visiting places around Mumbai. If you are planning to visit in the monsoon season, it would be wise to carry an umbrella with you during your visit.

However, people can also explore these caves round the year but should check whether the ferries are operational before planning a trip.

Entry fees and visiting timings at Elephanta Caves in Mumbai

The entry fee for Indian visitors is Rs 10 per head, while a ticket for foreign nationals will cost Rs 500. No entry fee for children below 15 years of age.

The caves are open from 9 am – 5 pm every day, except on Fridays when it is closed. However, the timings may vary slightly depending on the weather conditions, so tourists need to check before visiting.

Some other caves in Mumbai

Besides the Elephanta Caves, there are several other caves in Mumbai.

The earliest is Kanheri Caves near Borivali, which were built during the 1st century BC and contained Buddhist Stupas, shrines, and sculptures. Carved during two phases – 150 AD to 600 AD, the second phase has a better artwork quality than the first phase. The carvings are so well history because they have been exposed to outside conditions for the past 1800 years.

Another set of rock-cut caves are located on Elephanta Island in Mumbai harbor. There are three main groups of cave temples here, dating back to around the 6th century AD. The town surrounding the island was then called Gharapuri, which became corrupted into Elephanta or Elpata.

The rock-cut temples of Ellora were dug side by side in basalt cliffs. Construction started in 600 AD and continued for the next 300 years. There are 34 caves here, out of which 12 are Hindu, 17 Buddhist, and 5 Jain temples. The best known is the Kailash Temple dedicated to Shiva.

Bedsa Caves date back to the 2nd century BC or earlier, according to some accounts. They were re-discovered in 1819 by Captain John Smith during one of his hunts for treasure allegedly buried at ancient Buddhist monasteries by foreign invaders like Alexander the Great etc.

The Karla Caves were built between the 1st century BC to 10th century AD. They are also known as Kanheri-Karla or Kala-Kachha caves. The word “khal” means “window,” and the shape of these rock-cut structures has led them to be called so. These caves have several Buddhist Stupas, which were enlarged in the later period. The first excavation here happened around 170 AD, but major work started from the 1st century AD onwards and continues till the late 5th century AD.

These stone-cut temples and shrines were carved out during the reign of different dynasties from the phase starting from Mauryas, followed by Chalukyas, Rashtrakutas, and Yadavas.

The most popular of these caves that have gained greater attention include Shiva as Nataraja (the cosmic dancer), Shiva slaying Andhaka (Shiva’s son), Lord Shiva with consort Parvati, Ravana trying to lift Mount Kailash (home of Shiva), and the marriage of Shiva and Parvati.

Besides these, there are several other sculptures depicting gods, goddesses, and demons. Of the three caves that have been carved out from a massive basalt rock, there is also a shrine dedicated to Lord Ganesha. The best time for visiting Elephanta Caves in Mumbai would be from October to June; it remains relatively cool and dry.