Holi, Dhuleti, Dhulibandhan – whatever you call it. This festival invokes a grand sense of excitement among children and adults alike. It’s one of the popular festivals in India and Nepal, the 2 major Hindu-oriented countries. 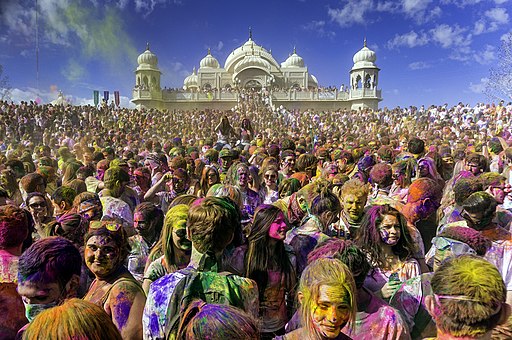 There are many legends associated with Holi. One such popular legend is of Holika.

According to an ancient text or ‘Narada Puran,’ a demon king called Hiranyakashyap, who terrorized people to worship him.

He was ruthless and wanted everyone to treat him as God. To his surprise, his own son, Prahlad, refused to worship him.

Prahlad was immensely devoted to Lord Vishnu. Hiranyakashyap efforts to transform his son into his worshiper were always thwarted due to the efforts of Lord Vishnu.

On many occasions, he even tried killing his own son, but he never succeeded. He soon realized that he might not be able to kill Prahlad, so he enlisted the help of Holika.

Holika was a demon who was believed to be invulnerable to the effects of fire. She ordered a fire to be lit and then grabbed Prahlad and sat on the pit of flames.

It believed that she had a special cloak that made her invulnerable to fire. But the moment Prahlad sat on her lap, the cloak covered him instead, and Holika was burned to ashes.

Prahlad later learned that Lord Vishnu granted him protection to reward his devotion.

Another Legend speaks about Lord Krishna and Radha.

When Krishna was young, he envied the fair skin Radha. He kept questioning his mother about him being black and Radha being fair-skinned.

Unable to think of a solution, she told Krishna that he could color Radha’s face in any color of his choice.

Krishna eventually rubbed many colors on Radha’s face, thus marking the beginning of a tradition wherein people rub colors on each other’s faces on Holi.

Holi is celebrated on 2 days. The first day is ‘Choti Holi’ and the second day is ‘Dhuleti’ or ‘Dhulibandhan.’ On the occasion of Choti Holi, people burn wood and leaves in a born fire.

They offer prayers and put coconuts in the flame. This symbolizes the end of worries and troubles and marks the beginning of new health and a prosperous year.

It also symbolizes the burning of all the evil and sadness, just like Holika. It’s therefore known as ‘Holika Dahan.’ It is a  joyous activity for people to sing, dance, and pray.

The second day is a splash of colors. Kids and adults soak each other in the water and apply color to each other.

People forget their enemies and come together to celebrate Holi. Many festival-goers enjoy Holi by consuming bhang – a treat made from Cannabis paste.

Holi is celebrated in different ways in every part of India. Whatever be the way, the excitement is the same in every Indian.

The only drawback in Holi is that people get intoxicated by consuming Bhang. This leads to fights. On many occasions, small fights turn very violent too.

Keeping in mind all the important notes, don’t forget to enjoy Holi with all your heart and spirit!!