Independence Day, one of the three national holidays (other two are 26th January Republic Day and 2nd October, Mahatma Gandhi’s birthday), marks the freedom of India from the British Empire. It is celebrated nationwide on 15th August annually.

Several nations, including the U.S., now observe 15th August as “India Day.”  On this day, schools and colleges and offices (Government or Private) are officially closed, but the celebrations begin.   Hoisting and decoration are done on major Government offices; even residential societies practice the same. People can be seen wearing the tri-color in clothing, accessories, badges, or simply by displaying the paper flag.

The Chief Ministers of each State of India hoists the national flag, followed by a speech marking the Nation’s journey from the struggle to freedom to post freedom developments.

In Delhi, after hoisting the national flag by the Prime Minister, various activities are showcased. Ariel stunts by the Airforce, March pass/parades by the Army, and Naval stunts by the Navy, featuring the beauty of our Nation.

India has shown the world that non-violence can lead to resolvement of any problem.

Prime Minister Narendra Modi’s government is likely to celebrate this memorable occasion with the theme “Yaad Karo Kurbani” (remember all the sacrifices). He will be visiting all the various historical places of India’s freedom struggle and bringing awareness to youngsters on the sacrifices of our heroes.

Central ministers would visit various places such as Kakori in UP, Jallianwala Bagh in Amritsar, Champaran in Bihar, and Dandi village in Bardoli Gujarat. 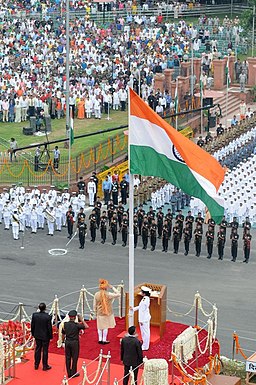 In a recent ‘Maan ki Baat broadcast, Prime minister Narendra Modi has reminded the Nation about the Quit India movement, which started on 8th August and completed 75 years. He has urged the Nation to celebrate Independence Day as a festival.

The Prime minister explained the tradition of speaking from the Red fort on 15th August of every year. This year, he wants to express the minds of 1.25 crore Indians, and he has requested to send him details of what we expect him to speak. You can send your suggestion on https://www.mygov.in/ or use an app that can be downloaded from the Play store.